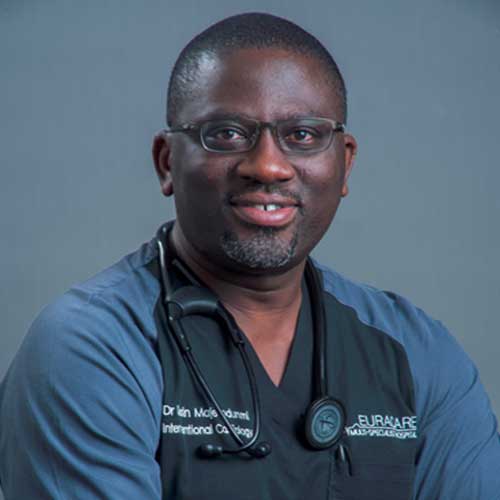 Dr. Tosin Majekodunmi – BSc (Hons), PhD, MBBS, MRCP (London), left Nigeria for the United Kingdom at the age of 14 after completing his secondary school education at Baptist Boys High School, Abeokuta. In 1990, at the young age of 16, he was successful in gaining admission to the University of London, Kings College for his undergraduate degree in Biotechnology, which he obtained in 1993. He then proceeded to register for a research project in biochemistry at the University of Southampton that led to the conferment of the degree of Doctor of Philosophy in 1997. He then enrolled in St. George’s Hospital Medical School, London and completed his undergraduate degree in medicine and surgery in 2002.

Dr Majekodunmi completed his medical and surgical internship in London and Basingstoke respectively before returning to London to complete his residency in internal medicine in 2006 and achieved membership of the Royal College of Physicians in London. Dr Majekodunmi was successful in obtaining a position in cardiology residency in the West Midlands in 2007 where he completed 2yr of basic cardiology training. In 2009, Dr Majekodunmi achieved a milestone in securing 1 of 5 nationally recognised training positions in adult congenital heart disease in London. Adult congenital fellowship training was conducted at the world-renowned Royal Brompton Hospital, Guys and St. Thomas Hospital as well as Great Ormond Street Hospital before moving to Toronto General Hospital in 2012 to pursue an interventional / structural adult congenital heart disease fellowship which he successfully completed in 2013. Dr Majekodunmi is fully trained in all forms of minimally invasive structural and valvular heart disease interventions, diagnosis and treatment of pulmonary hypertension and clinical assessment and treatment of pregnant women with cardiac disease. He relocated to Nigeria in 2014 and since 2016 has been the interventional cardiologist and medical director of Euracare Multi-Specialist Hospital.